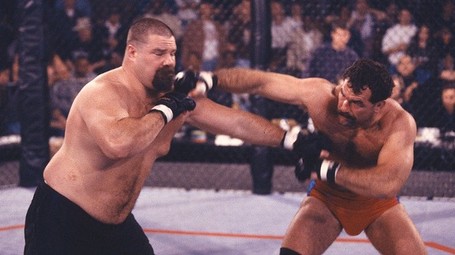 Our show by show look back at the early days of MMA, specifically the UFC, begins in September 1995, with UFC 7. UFC very much still in its formative stages at this stage (the first show we covered didn't even have judges, and it would be some time yet before rounds would be fully introduced). The product was still very raw, and while that had a tendency to produce some very lop-sided contests it also produced some incredibly interesting and incredibly watchable fights while the promotion, and the new sport of "mixed martial arts" (that still wasn't formally known by that name at the time) found its feet.

Unlike our wrestling shows, we're not treating it like it's truly 20 years ago - we do discuss some of the modern action at the top of the show, before going into a look at the news from the time ahead of the show (even by UFC Ultimate Ultimate and UFC 8 people things are quickly starting to unravel with pay per view providers and government officials wanting the brutal sport shut down). After that we do a match by match review of the show providing comment and analysis of each fight.

Join Tom, Bob and Chris - three relatively new MMA fans as they take you through the dawn of modern day UFC. Much like the product we're covering, we're still very much finding our feet when it comes to talking about old MMA coverage - but stick with us as we take a show by show look at the promotion. Currently, the only methods of subscribing are via our Wrestling 20 Years Ago feed (see iTunes, and RSS). I've also provided a direct download link below each show.
​
Tom Martyn is joined by Chris White and Bob Bamber for the first ever MMA 20 Years Ago Podcast, reviewing the UFC: 7 "The Brawl In Buffalo" show. Out of 20 years ago mode, we review a 33 minute marathon between Ken Shamrock and Oleg Takturov, and the main tournament that featured no weight classes, or judges, or rounds. It's a lot of fun!

Direct Download
​
Tom Martyn is joined by Bob Bamber and Chris White reviewing UFC Ultimate Ultimate pay per view. The first to introduce judges in UFC and eight of their top fighters from the first seven shows. We discuss the historical context first, so jump to 41 minutes if you want to get straight to the show review.

Direct Download
​
Tom Martyn is joined by Bob Bamber and Chris White for the latest installment of the MMA show. After reviewing UFC London Bisping vs Silva show and previewing UFC 196, we take a trip back in time to review UFC 8: David vs Goliath. A show of new stars, including one of the most brutal MMA knockouts ever and the first appearances of some noteworthy names to come.

Tom Martyn is joined by Bob Bamber and Chris White in our latest trip to the world of MMA. After a look at the Foxcatcher story that underscores this show, and all of the latest news we review another fascinating UFC show. Including the best match we've covered so far and quite possibly one of the worst MMA matches ever (which, to nobody's surprise, Bob actually tries to defend!)
Show review begins at 29 minutes.

Tom Martyn is joined by Chris White and Bob Bamber for the latest trip to the UFC with their UFC 10 show. As usual, there's a lot of political discussion and another venue change, but we review another interesting event including the first appearance of Mark Coleman.

Direct Download
​
Chris White is joined by Bob Bamber reviewing UFC 11, the UFC tournament that had no final. After we discuss Mark Coleman winning again – who is now 5 and 0 in our last two shows, we skip forward 20 years to look at CM Punk’s MMA debut.

Direct Download
​
Chris White is joined by Bob Bamber and Tom Martyn reviewing UFC Ultimate Ultimate 1996, including a great pro-wrestling promo from Scott Ferozzo and one of the barmiest sub-2 minute matches you will ever see.

Direct Download
​
Chris White is joined by Bob Bamber and Tom Martyn to review UFC 12. Hear the crazy story of how the show was moved across the country on THIRTY SIX HOURS notice, before we review the first UFC show with weight classes, the debut of a certain Vitor Belfort and the showdown between Mark Coleman and Dan Severn for the UFC Championship.

Direct Download
​
Chris White is joined by Tom Martyn and Bob Bamber reviewing the latest UFC show, including the debuts of Randy Couture and Tito Ortiz. Not before doing a play-by-play of an episode of Friends!